Tora Tora Tora stands out as a prime example of the art of model ships in the cinema due largely to the scale of the the work undertaken and of the ship models themselves. The visual Effects were supervised by LB Abbott and cost, in 1970, $1.25 million. The model shoot was staged and filmed in 20th Century Fox's Sersen tank and took about 40 days to complete. 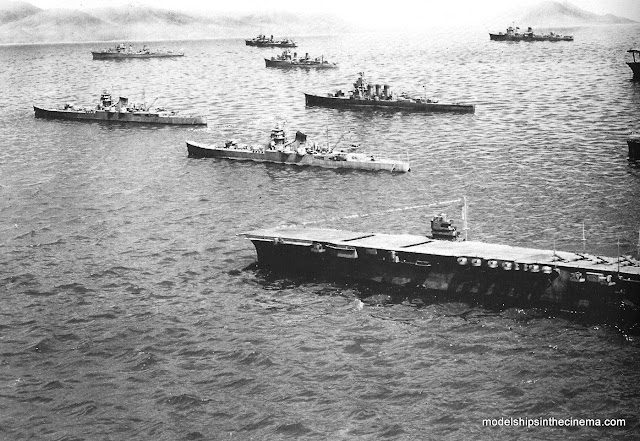 The 20th Century Fox miniatures department supervised by Ivan Martin and Gail Brown  constructed 19 Japanese ships and 10 American ships. The ship hulls were made from fiberglass from molds made of plaster. The shape of the Japanese and American hulls turned out to be roughly similar so only a relatively few masters were made.  The foreground Japanese ships were built at 1/24 scale and the American ships at a larger scale of 1/16. It was decided that as the American ships were almost all to be blown up, the explosions would look more believable at the larger scale. The sequence of the Japanese fleet making their way across the Pacific used smaller scale models in the background to make them look further away. All the superstructures were built individually from wood, metal and plastic. The details up close are generally quite crude but in the scope of the film this is not visible. Generally in movie making you don't waste time and money on anything that won't ever be seen. The largest of the models was over 40 feet and they ranged down to about 12 feet for a harbour tug. 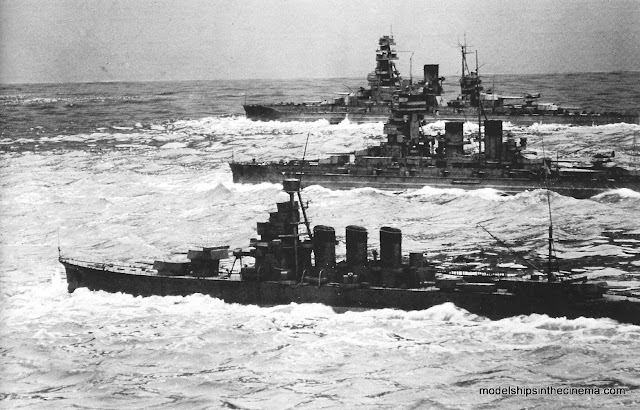 The models were powered by Golf cart engines, though during the storm sequence they had to be augmented by underwater cables attached to winches to overcome the force of the wind and waves generated. Up to 4 ships could be attached to the same cable so that they kept station as they traversed the tank. 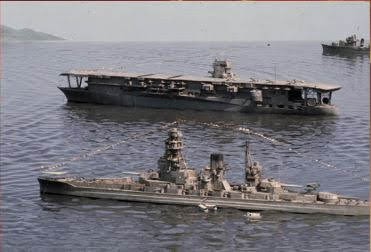 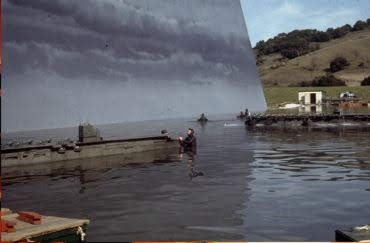 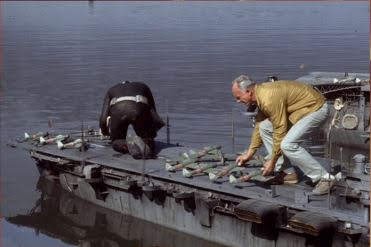 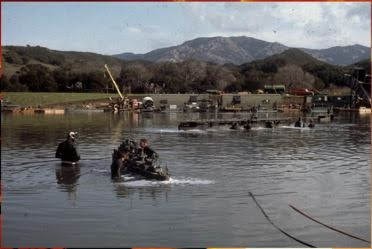 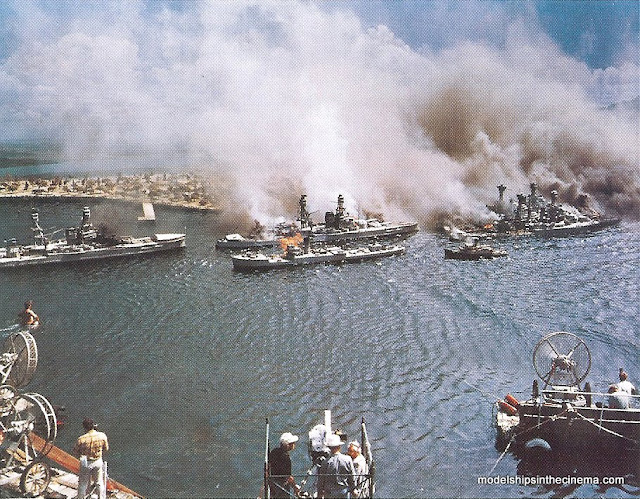 The depth of the Sersen tank allowed for 3 feet of water. This was designed in the days when waders were the optimum wear for tank technicians. With the development of wetsuits it was decided to add an extra foot of depth to 4 feet for the Tora shoot.  A hinged false weir was attached over the original overflow to increase the depth. Blue vegetable dye was added to the water to help hide all the underwater rigging and detergent was added to produce the white water in the storm sequence. To create the wind and surface wave effects six massive converted aircraft fans along with four large truck mounted fans and 15 wind machine fans were strategically placed around the tank. Fog was created with a mix of black and white smoke pots as well as oil based smoke machines. 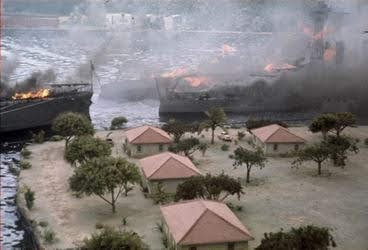 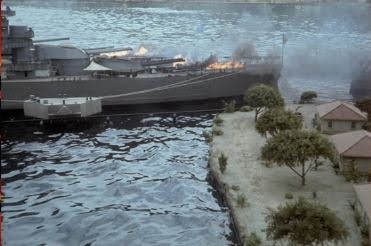 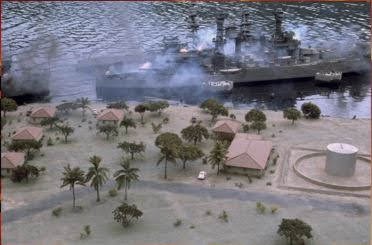 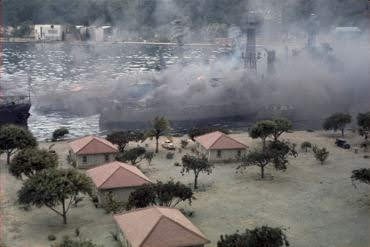 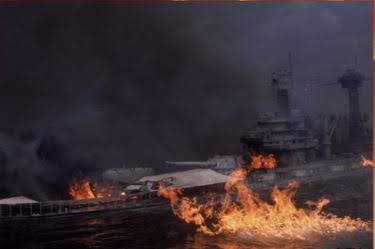 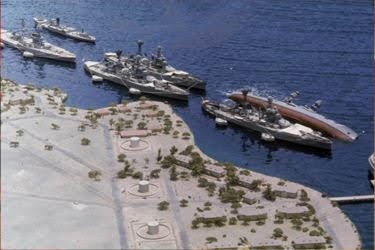 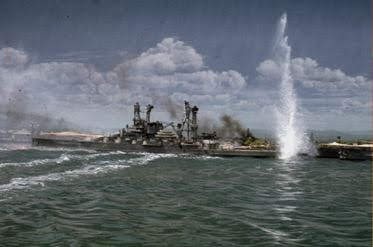 The torpedoes were simulated by a cable that pulled a compressed air nozzle and hose along under water leaving a trail of bubbles. The water spouts caused by the torpedo detonations was created by small charges, just below the surface, blowing gypsum powder into the air to simulate fine water spray. The gypsum looked good on its way up but tended to hang in the air too long for falling water but the shot cuts before that becomes apparent. 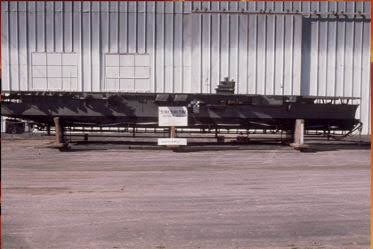 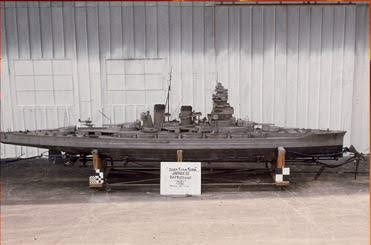 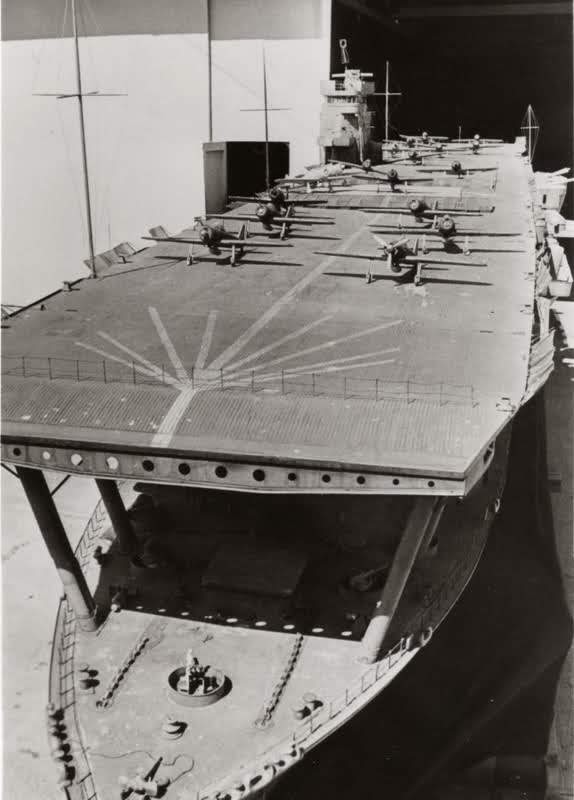 The production purchased a Photosonics camera capable of 360 frames a second or fifteen times normal speed, which was used used for all the model shooting though not always at the top speed. The shooting was generally around 5 times faster except for some of the explosions which were shot at the top speed revealing multiple rolling flashes within a single blast.

The Arizona model was fitted with a release mechanism that allowed the mast to fall to an angle of 40 degrees. The Oklahoma model was attached to a rig that enabled it to roll 180 degrees over. The depth of the tank however would not allow this to happen in one shot so the ship rolled as far as possible, the shot cuts away and then cuts back for the full turtle. Between cuts the superstructure was removed to get the final part of the capsize.

The storm sequence was shot during completely sunny weather when they wanted overcast skies. Conversely the attack on Pearl Harbour required Sunshine but the days were overcast.  L.B. Abbott said the low contrast light really helped to show up the bright red of the explosions and fire, which is readily apparent in the footage. There was a lot of miniature footage shot that unfortunately was trimmed from the final cut in order to keep the running time of the movie under control. 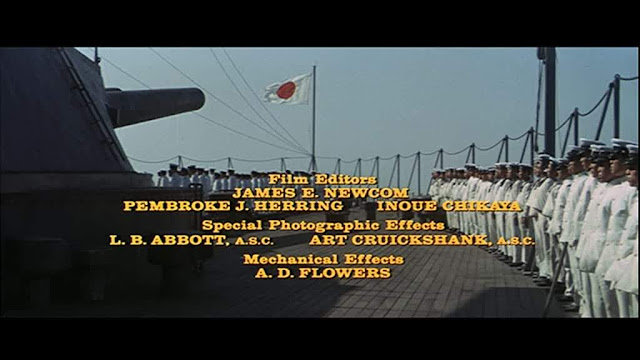 In the future I will have a brief look at the life of the models subsequent to the release of the movie.