The Seaview submarine of Voyage to the Bottom of the Sea is one of the most recognizable fictional submarines second only to the Nautilus from 20,000 Leagues Under the Sea. That is probably mostly due to the popular Irwin Allen TV series that ran for two seasons (1964-1968) with the second season in colour and featuring the addition of a flying sub that was launched from a bay under the bow. The Seaview miniature was modified for the second series in a number of details the chief of which was having only four windows in the bow instead of the eight in two rows of four of the original movie version which is the version we will be concerned with here.

The special photographic effects were supervised by L.B. Abbott with the miniatures built under the supervision of Herb Cheek head of the Fox miniature prop department. 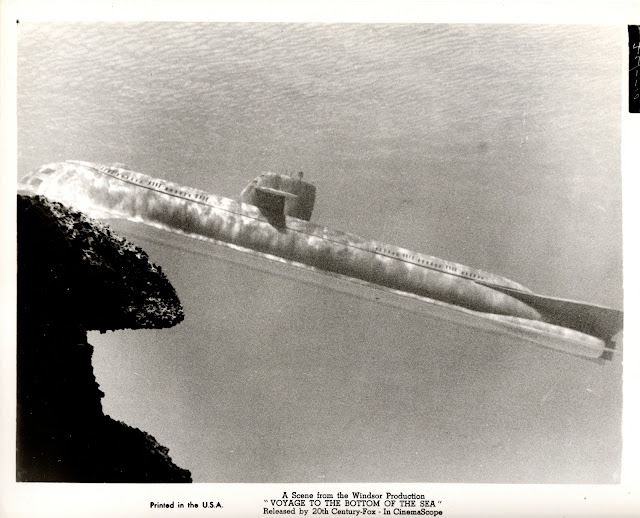 According to L.B. Abbott in his book "Special Effects Wire- Tape and Rubber Band Style" the largest miniature of the Seaview was 19 feet (5.8m) long, though I have often seen it referred to as the "18 footer" and it is described as 20 foot in the American Cinematographer article from September 1961.
It was molded in fibreglass from a wood and plaster master

This large model was used for all the surface shots. In the opening shot and the first time we see the sub it is shown doing a rapid surface breach which is pretty spectacular. The tank had a central pit that was dug out for the sinking of the Titanic from the 1953 film of the same name. Rails were built at a thirty degree angle up and out of the pit to three feet just below the surface of the water. Cables were attached to a truck that drove at speed and stopped at the right distance to launch the miniature to the surface. Fire hoses were installed and aimed at the ballast ports to make it look like the ballast tanks were blown.

Extra nozzles and hoses were added to the bow just underwater to create a bigger bow wave for all the surface running shots. A small amount of detergent was added to the tank water to enhance the foaming effect.

The underwater shots were achieved with a smaller 8 foot (2.4m) model with the exception of the giant octopus sequence where a much smaller four foot (1.2m) model was used with a real octopus. Another casting from the same mold as the 4 foot model can be seen on display as set dressing in the Admirals office in the movie.

The 20th Century Fox tank known as the Moat was 60 feet (18.3m) wide 120 feet (36.6m) long and 11 feet (3.4m) deep. For reasons of economy a dam wall was built dividing it in half to 60 by 60 feet thus reducing the volume of water that had to be filtered. Over the top of the tank was a series of wires that supported a large canopy diffuser so there was no direct sunlight spoiling the deep ocean effect.
A camera barge like a big open box with tapered sides was constructed to allow two cameras to operate at the same time. It floated at a level just above the floor of the tank to allow it to be moved around easily. Two convex glass ports were purchased from Disney and installed into the barge one upper and one lower. These ports were used to film the underwater sequences for 20,000 Leagues Under the Sea 1954. They worked to cancel out the enlarging effect due to the refraction of light shooting through water and gave a wider view. You can get an accessory for a GoPro camera that does a similar job.

A second camera barge was built for the diving and surfacing shots that were to be rear screen projected behind the windows in the full size set. It had a sloped front made from clear plexiglass panels with a central metal support. Two cameras with spherical lenses shot each side view. The set had a central mullion that hid the join between the two rear projectors. A fan shaped nozzle was placed just below the frame and a pump provided the extra turbulence. As the barge was towed and its speed increased the front wedge angle of the panels would make it submerge. Then as the speed slowed its natural buoyancy would lead it to rise.


To enable working at a small aperture for maximum depth of field, a bank of brute arcs was set up on scaffolds to augment the diffused sunlight.

Other models constructed for the film were a mini sub, A UN attack submarine, mines and various icebergs and ice berg chunks.
The mini sub was built at 11 inches (280mm) and was in scale with the large Seaview model. It can be seen being launched from a bay under the middle of the hull. I would think a larger model was made for closer scenes were it cuts a mine cable and for its subsequent destruction but I can't find any information to confirm this.

The icebergs were made from steel frames covered in wire mesh and then cheese cloth covered which was then coated in wax. The chunks ranged from four inches (100mm) to 24 inches (600mm) in width.

The UN Attack submarine was also molded in fibreglass and was 32 inches (812mm) long.
The red fiery sky effect was achieved by high speed filming three flame throwers that shot out a 20 foot (6m) long flame. This footage was then double printed and staggered and combined in the optical printer and then double printed  and staggered again to fill the Cinemascope frame. Apparently it required 57 passes on the optical printer to complete the effect.

To get the effect of the fiery sky in the underwater shots it was first tried to gel the bank of arc lights red. This only produced a thin and barely visible result. In the end red gelled underwater lamps were placed in the back of the tank and reflected off the surface of the water producing a convincing effect.

I think there is a particular "glossy" signature look to all L.B. Abbott's 20th Century Fox visual effects sequences. They are always immaculately composed and lit. The action and screen direction is always clear and precise and that is certainly what you get here.